Cladding and flagstone paving, manufactured by CMA member Revelstone, has played a crucial role in the redesign and revamp of the garden at Cape Town’s Baxter Theatre. The revamp was undertaken to prepare an outdoor venue for the Rolex Arts Weekend, one of the world’s most important and prestigious international arts events, part of which was staged at The Baxter on 7 and 8 February 2020.

“The Rolex event required level spaces where furniture could be accommodated and where people could gather and mingle. Timber decking had been initially mooted but on close analysis this solution proved impractical. As an alternative I proposed levelling the slopes into a series of stepped terraces which would not only provide a venue for the Rolex event but would serve as a user-friendly outdoor sanctuary for students and theatre goers, as well as for staging subsequent events.

“This approach required extensive earthworks and an upgrading of the garden. In addition to four level terraces, a retaining wall was built to shore up the cut face of the ensuing vertical embankment below what remained of the upper slope section.

“We wanted to use natural rock for dressing the retaining wall and for the paving, however, we neither had the budget nor the time to quarry natural rock. As an alternative I approached Revelstone whose cast-stone concrete products show no discernible difference to their quarry-sourced equivalent; in fact they look completely natural.

“For example, its Kent Random Edge flagstone pavers mimicked the striations and colour of the surrounding rocks at Falling Waters, an American residence in Pennsylvania, designed in 1935 by the famous US architect, Frank Lloyd Wright.

“We chose Revelstone’s Saxon Split Cladding to dress the retaining wall as it presents an uneven stone-like surface which resembles cut sandstone. We also used it to clad the plant boxes built into the retaining wall and to dress the risers on the stairs which link the terraces. We opted for another natural looking Revelstone product, Devon Wall Capping, for overlaying the top of the wall.”

Revelstone MD, Alex Cyprianos, says although Saxon Split Cladding is manufactured in one standard size for ease of installation, no face repetition is apparent after installation.

The lower and largest of four terraces was surfaced with a combination of Kent Random Edge paving and grass. This large flagstone paver has a slightly irregular edge and a subtle hewn surface with natural indentations which lend it a time-worn appearance. It was also used to pave the top of the steps and the stone benches which were built into the retaining wall.

“The Revelstone products were much quicker to install than natural stone and they will last much longer,” advised Van der Merwe. ‘We had to create a path on the lawn for high-heel users and we laid the Kent pavers in a random pattern which I designed for the other terraced areas as well.”

Masterpiece Architects was responsible for the conceptualisation and all the design work. Landscape architects, Annette Zulch Designs, handled the project management of the installation work. It also managed the greening of the new spaces and a garden upgrade which included plant selection with input from Signature Gardens. The earthworks, the construction of the retaining wall, and the paving and cladding work was done by main contractor, Uvuyo Group.

“It has created a beautiful space which patrons and audience members can enjoy while visiting or attending performances at the theatre. Most importantly, it has enabled The Baxter to offer the public the opportunity of hiring the space for weddings, functions and corporate events. This means we can generate additional income for the theatre especially after its seven-month closure during lockdown. A little-known fact is that The Baxter is not funded by the Department of Sport, Arts and Culture, so it is vital that we find innovative ways to generate additional income by attracting new audiences and the public to our spaces and venues.

“The Rolex Arts Weekend was a culmination of a year’s planning which saw more than 200 renowned artists and arts leaders from South Africa and around the world gathering at The Baxter. The Weekend involved a series of talks, readings, exhibitions and performances, and featured the work of the 2018-2019 protégés of the Rolex Mentor and Protégé Arts Initiative, along with their mentors. Highlights included dance, architecture, literature, music, arts symposia and cinema.

Well over 500 000 patrons attend over 2 700 performances at The Baxter annually, making it one of the busiest theatres in Southern Africa. Founded in 1978, it has stayed true to its promise of always being open to all and to stage work of the highest artistic quality. It aims to reflect the cultures of all South Africans on its stages, its foyers and spaces, thereby promoting an interactive and meaningful relationship with its audiences and patrons while generating a spirit of goodwill and nurturing creativity. 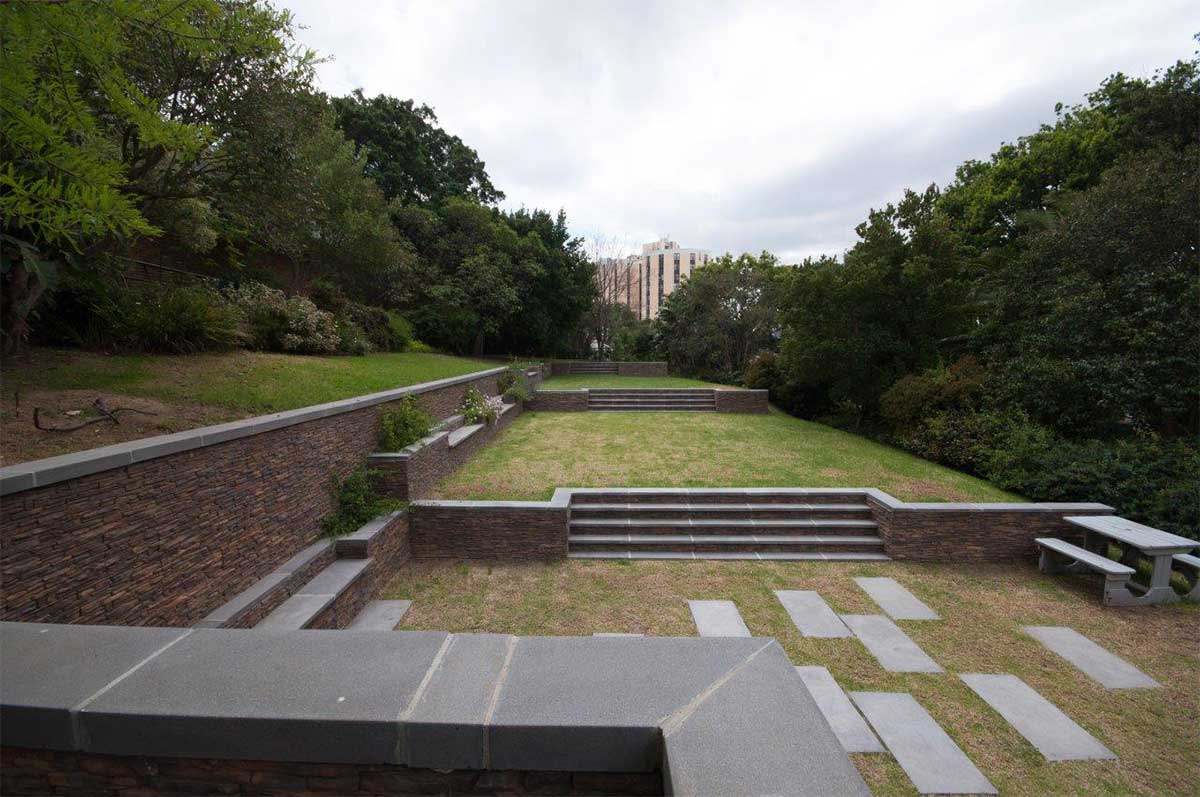 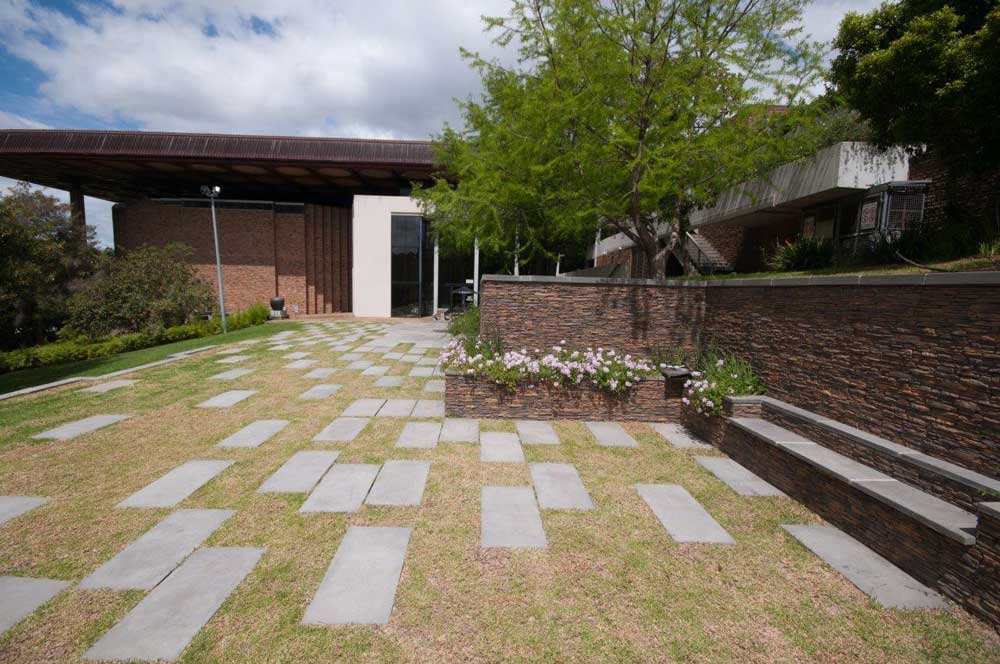 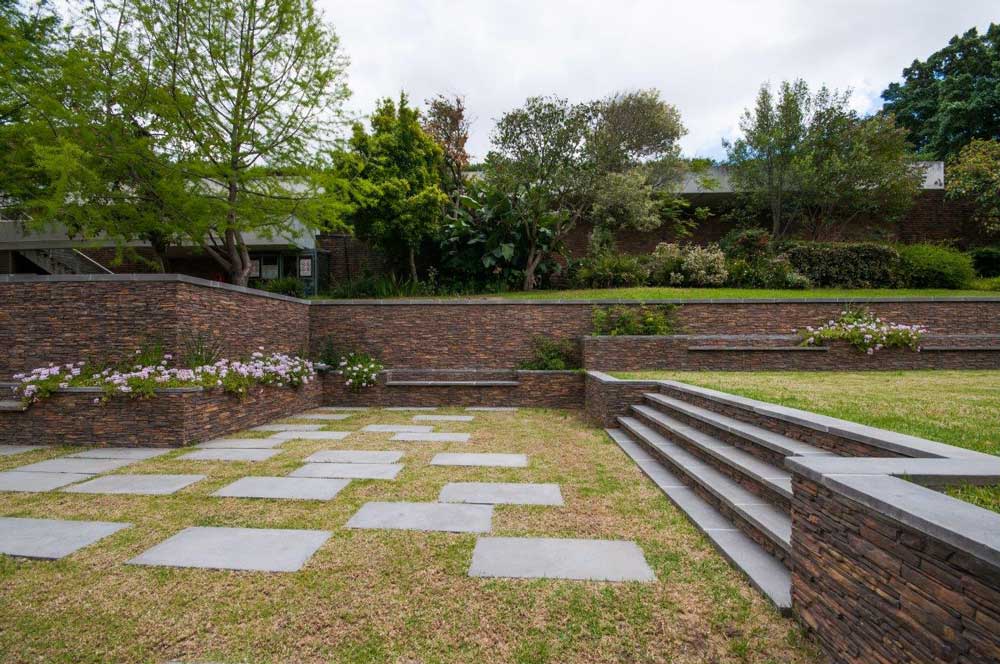 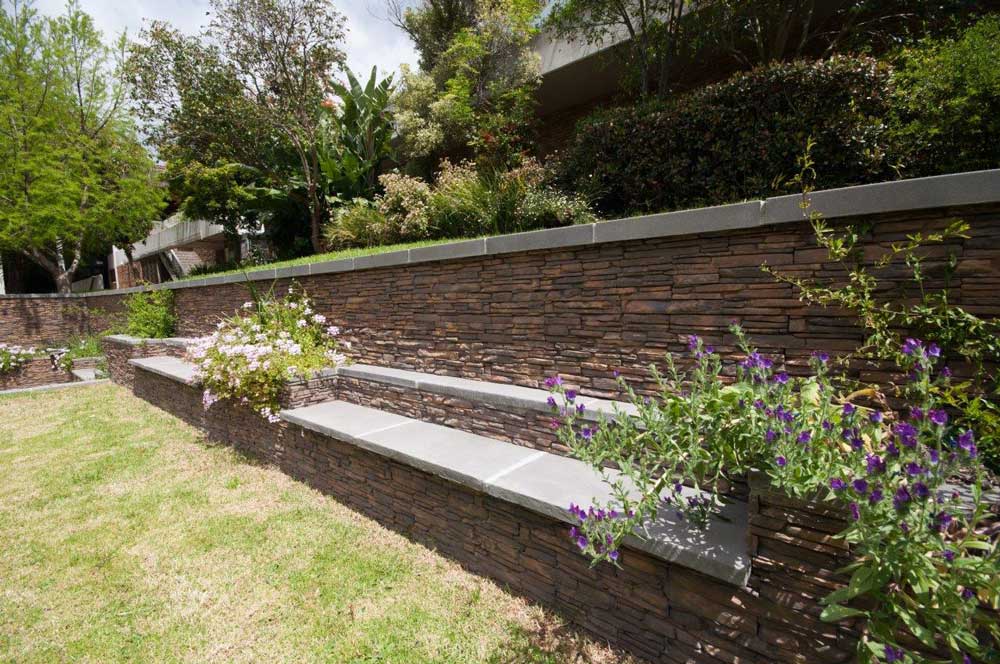 One of the retaining wall benches dressed with Saxon Split Cladding and topped with Kent Random Edge paving. 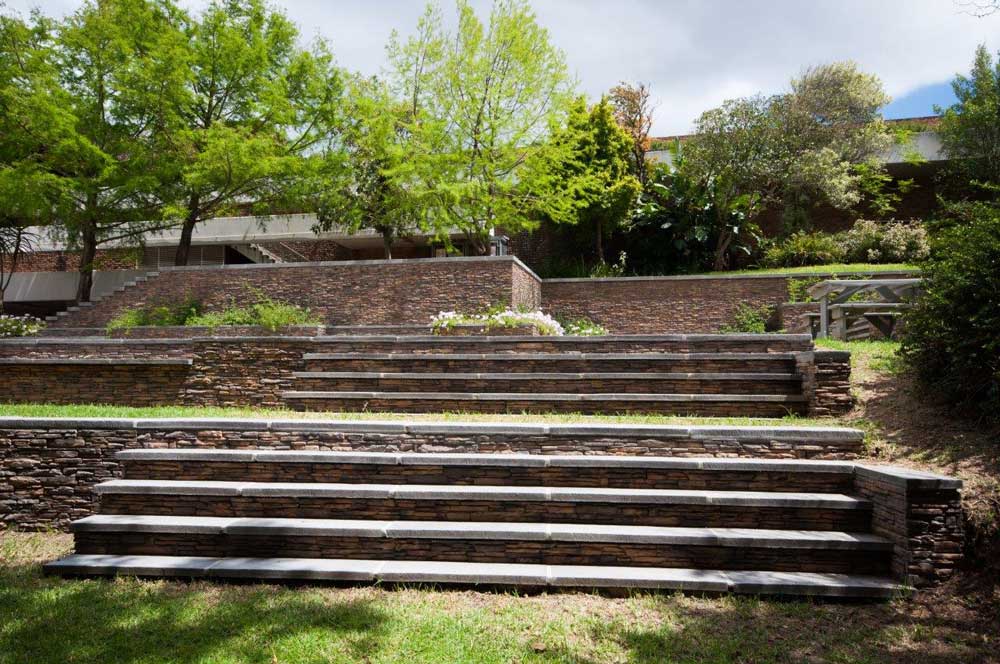 Some of the stairs dressed with Revelstone’s Saxon Split Cladding and paved with Kent Random Edge paving. (Photographs 1-5 by David Beer). 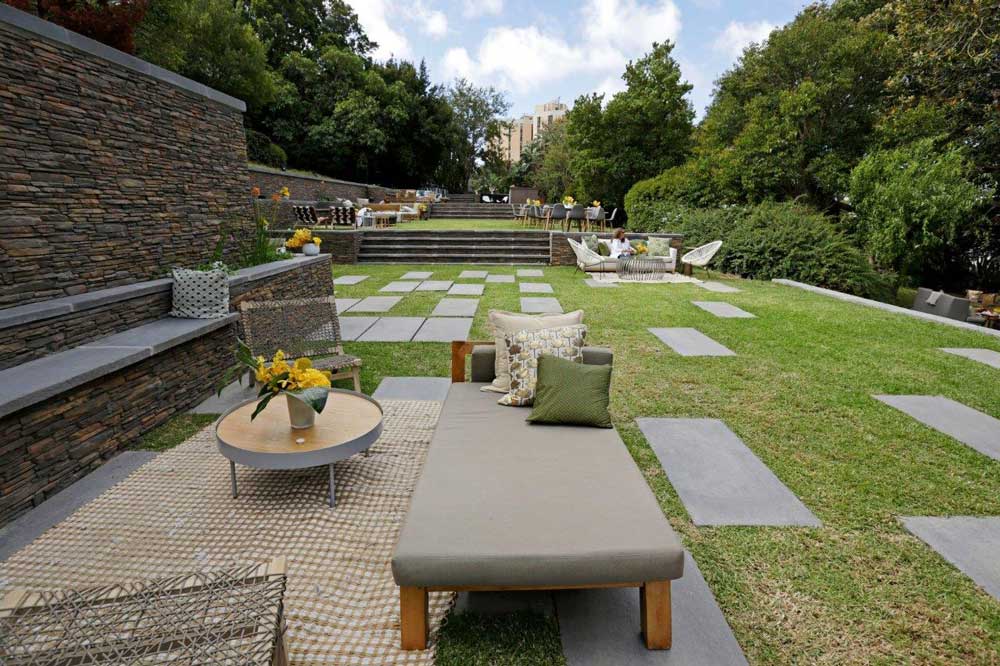 Garden furniture blends in perfectly with the newly created terrace garden in preparation for the Rolex Arts Weekend. 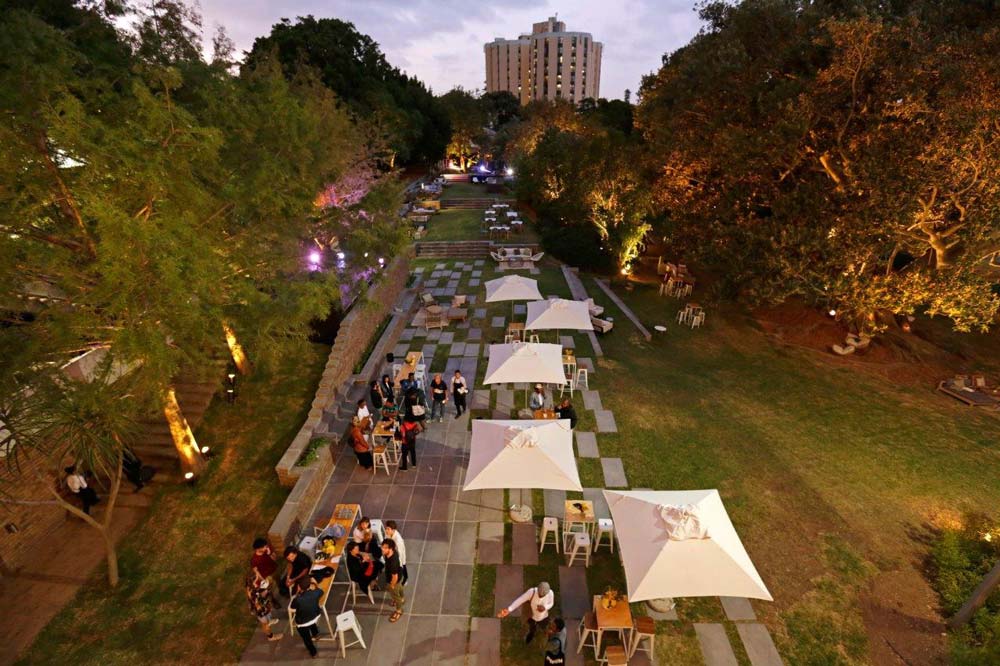 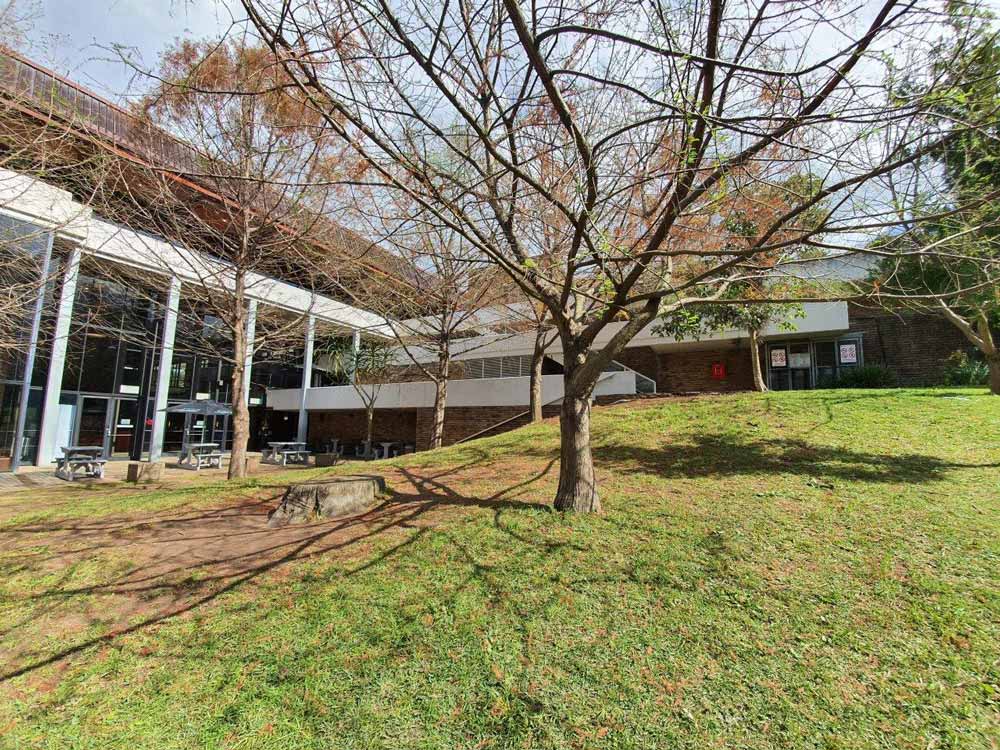 The Baxter Theatre garden prior to the commencement of the earthworks. (Photograph 8 by Julius van der Merwe).
PrevPreviousIndustry News
NextElevating Leeu Estates with Revelstone ProductsNext

You can find out more about which cookies we are using or switch them off in settings.

Fill in your details and we’ll get back to you in no time.

This website uses cookies so that we can provide you with the best user experience possible. Cookie information is stored in your browser and performs functions such as recognising you when you return to our website and helping our team to understand which sections of the website you find most interesting and useful.

Strictly Necessary Cookie should be enabled at all times so that we can save your preferences for cookie settings.

If you disable this cookie, we will not be able to save your preferences. This means that every time you visit this website you will need to enable or disable cookies again.